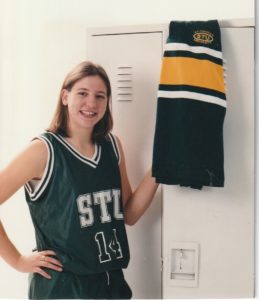 Sue Ross was a tri-sport athlete, competing for the Tommies in Volleyball, Basketball, and Rugby, and was renowned for her competitiveness, team leadership and personal integrity.  Over five years at STU, she was a three-time MVP for Women’s Rugby in 1997, 1998, and 2000, and led them to back-to-back championships in the NB/PEI League.  Her skill and on-field leadership were key to the program’s advancement, and after the team moved to Atlantic University Sport, Susan powered them to the AUS finals in 1999.

That was in Rugby.  In Basketball, she was twice named to the Atlantic Collegiate Athletic Association Women’s Basketball First Team All-Conference.  In 1997-98, she was named Team MVP and STU Female Athlete of the Year, a milestone she would repeat in 1999-2000.  When she was a starter for the Basketball and Volleyball teams, she would often times be playing games for both teams on the same day.   Her nominee notes that she exemplified the spirit of STU with her dedication to athletics and academics, and that she was a true sportswoman who contributed greatly to the university.