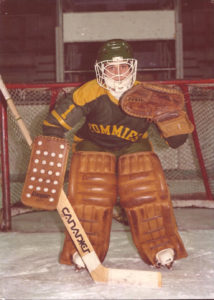 Kirk Firlotte was an outstanding goaltender for the Tommies Men’s Hockey Teams from 1979 to 1984.  He was twice named to the Atlantic University Athletic Association First-team All-Conference, and he was Men’s Hockey MVP and STU Male Athlete of the Year in 1981-82.  Following his university career, Kirk attended training camp for the New Jersey Devils and was a two-time Canadian Hardy Cup Champion before turning to coaching.  He has been inducted into the New Brunswick, Prince Edward Island, and Campbellton Sports Walls of Fame as a member of championship teams. He is also an individual member of the Dalhousie and Minto Sports Walls of Fame.

In bringing forward his nomination, his daughter Alyssa wrote that through losses, injuries, and team hardships, her father remained committed to STU and his teams had the heart to accomplish their goals.  During his STU career, it is said that he averaged almost 70 shots a game.  Once, when facing UNB near then end of the season, he faced 54 shots as the underdog Tommies won 3-2 and The Daily Gleaner reported;  “Firlotte Comes Up Big—What He Did to UNB was Devilish.”