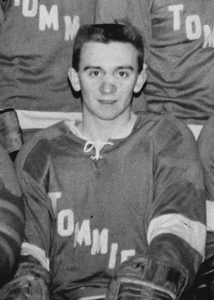 Greg Morris, of Chatham, NB, was a member of the Tommies varsity football and hockey teams. In four seasons on the ice, Greg accumulated 25 goals and 41 assists in 40 regular season games. In his senior year, he finished eighth in league scoring averaging just over two points per game.

On the field, Greg was the Tommies quarterback. In 1962-63, he led the team to a near-perfect regular season, losing in the final to the Saint John Wanderers.

Greg was recognized for his athletic achievements as the university’s Athlete of the Year in 1963.

Two years later, Greg formed the high school hockey “Tommies” in Chatham, who he coached to 10 Provincial AAA titles. He’s also had a storied coaching career in baseball and has won numerous New Brunswick, Atlantic, and Canadian titles.
Greg has been inducted into the Miramichi Sports Wall of Fame and the New Brunswick Sports Wall of Fame.