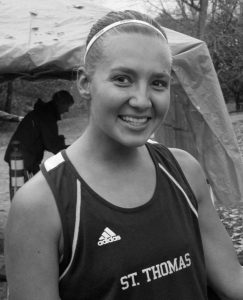 Nicole (Badry) Holubowich led the cross country running team at St. Thomas from 2007 to 2009. In that time, she won back-to-back Atlantic Collegiate Athletic Association individual titles and was a two-time conference all-star and MVP.

At the Canadian Collegiate Athletic Association national championships in 2008, Nicole finished eighth out of 113 runners and set the university record for a 5 km race (20:13), which remains to this day. She was named the university’s Athlete of the Week on a number of occasions and was given the cross country team’s MVP award in 2008 and 2009. Nicole excelled academically as well—she was a two-time CCAA National Scholar and a two-time CCAA Academic All-Canadian.

On top of her athletic and academic abilities, Nicole was active in the university and Fredericton community. During her time at St. Thomas she spearheaded the Bare Your Soles – Shoes for Peru initiative, participated in charity runs, and volunteered at elementary school meets.