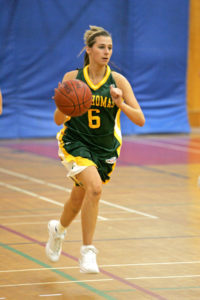 Alicia Sterling was a member of the Tommies Women’s Basketball Team from 2005 to 2009.  Her athleticism coupled with her exceptional work ethic contributed to her development as elite defender.  Her competitiveness helped her grow into an all-round player and in 2008-09, she was Team MVP and STU Female Athlete of the Year.  In the words of her coach Fred Connors, “Alicia’s journey during the 2008-09 season was remarkable as she put together one of the most remarkable individual performances in STU Women’s Basketball history.”

That year she was named ACAA Player of the Month, CCAA All-Canadian for February, STU Athlete of the Week three times, and ACAA First Team All Conference.  She led her team in scoring, was second in steals, and third in rebounding.  She was the first member of the women’s basketball team to be named the Atlantic Collegiate Athletic Association Player of the Year and a Canadian Collegiate Athletic Association All-Canadian.  She capped it off by leading the Tommies to their first ACAA championship in over a decade.