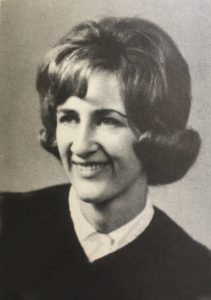 Mary Lou (Wolstenholme) Foreman was one of the first members of the women’s varsity basketball, volleyball, and badminton teams at St. Thomas. A talented guard, Mary Lou joined the Tommies on the court in 1962 after winning a Maritime Intercollegiate championship with St. Francis Xavier University.

At STU she was a pioneer in the evolution of women’s varsity basketball, which has reached championship level in recent times. Mary Lou demonstrated her leadership abilities not only as an athlete, but also as a representative on the Student Executive Council and proctor of the ladies residence.

In her final year at St. Thomas, Mary Lou was the first female to be awarded the university’s silver medal in recognition of her commitment to athletics and participation in three sports.

Upon graduation Mary Lou continued her involvement in sports as a curler, basketball coach, and nationally certified basketball referee.