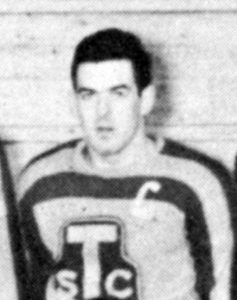 William McMullin was a star hockey and football player for the Tommies in the 1950s. He was a part of the team that earned the New Brunswick Canadian Rugby Football Union title and was the lone scorer in the Maritime Championship game against the Shearwater Flyers.

On the ice, William was a strong skater, deft passer, playmaker, and pure scorer. He is known as a talented athlete and two-way player that looked after his teammates.

In his senior year at St. Thomas Academy, William received the Joe Walsh Trophy as Outstanding Athlete of the Year.