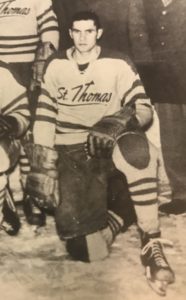 egan his hockey career with the Tommies playing for St. Thomas High School in 1955 and he would finish eight years later in 1963 playing for St. Thomas University.  In his first year, Larry helped his team reach the Maritime final, and he later played a key role on the team that captured the 1960-1961 Maritime College Championship.  In the 1960-61 Maritime Championship tournament, Larry scored the game-winning goal against Mount Allison, and in the championship game against St. Francis Xavier, he scored two goals to give St. Thomas its first Maritime Championship.  In 2010, Larry was inducted into the STU Sports Wall of Fame as a member of the 1960-1961 Men’s Hockey Team.  He was inducted into the Miramichi Sports Wall of Fame in 2012.

Many are aware of Larry’s role in the historic wins against MTA and the STFX in 1961.  Less well known is that on February 2, 1962, STU played Laval University who were the defending Quebec-Ontario Intercollegiate Champion. The Tommies beat Laval 7-4 at the Lord Beaverbrook Arena in Chatham.  At that time, there was no Canadian Championship, though local fans and the New Brunswick newspapers reported that Maritime fans had billed the game in advance as the championship final.  Just as in the game against STFX, Larry Wood scored two goals against Laval.