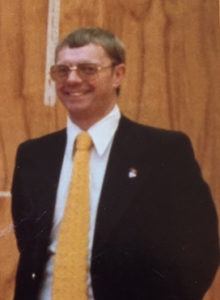 Ivan Rideout was the Tommies Men’s Basketball coach from 1980-1993.  Over that time, he instilled a winning culture that propelled his teams to success in the New Brunswick Collegiate League, the Maine State Small College League, and the Atlantic Collegiate Athletic Association.  In his first seven years, Ivan coached to seven championships in the New Brunswick Collegiate League, and the Tommies would win a State of Maine championship before moving into the Atlantic Collegiate Athletic Association.  He was named Coach of the Year in all three leagues—three times in New Brunswick, once in Maine, and twice in the ACAA.

As one of his players Stephen Horsman recalled: “I have seen Ivan’s guidance and impact on his players; keeping them in school and showing them that there are more important issues in life than playing basketball.  These players became teachers, police officers, and businesspeople.  All of whom contributed to society and gave back to their communities.  Nancy and the Rideout family opened doors to accept players as part of their family, and never gave up on them.  This was the way that Ivan coached as well.”