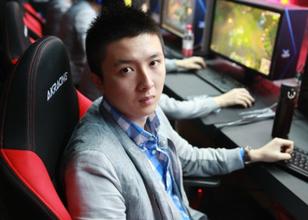 Zhongzhe Lin,24, has been a professional e-sport player for three years in China. He and his league of legend team Positive Energy won the champion of The Tencent League of Legend Pro League 2013 Summer Season. Right now, he already retired and became a game-caster in a Chinese web-cast.

How did you get into competitive gaming?
At the beginning, I watched all kinds of video games and also occasionally organized team to go to amateur competitions. Since Grade 11, I get involved with e-sport. And I want to consider e-sport as my career in Grad 12. Three years ago, when e-sports in China just started, I saw a chance for a online trials of a professional team. I entered the trials and became the member of the team. You have to be extremely passionate i to make it your career. I think that’s the dream life for all the e-sport fans. I’m the lucky one.

Do you think e-sport should be promoted more in university?
To promote it in university might be little bit too late for some esport, like League of Legends, Dota and Star Wars, if you want to be a professional player. There are many different types of e-sport games. Take League of Legends as a example; 17 and 18 years old is the best age for playing professional competition because there are high requirements for reaction andconcentration for these games. If we start promoting in university, many of them will already miss their best time for high-level competition. So I think at least for League of Legend, to promote it in university can make more people pay attention to it and get to know what e-sport is. It’s great. But it won’t have much effect bringing new blood into the professional e-sport competition.

What do you think of people who do not taking esport seriously?
As I mentioned before, many games have strict requirement of reaction and concentration. To simplify, the age of most professional players is pretty young, around 17-20. However, in Chinese tradition concept, children should go to school and get good grades rather than play computer game during this age period. Most parents are against it and prevent their child from spending lots of time on computer games and video games. Not only parents, a huge number of people misunderstand e-sport as web-addiction.

What’s your favorite part about competing at such a high level?
When you stand at the stage and see thousands in the audience screaming and cheering for you, you will feel that there are many people who have same hobby with you and understand you. And to have a fierce fight with someone in the same level is the best way of improving yourself. That’s one of the greatest moment in my life. After Tencent League of Legends Pro League, I experienced indescribable ecstasy for a long time. I still remember the moment we won the game. All of my teammates, our coach, manager and our supporters together yelled with the loudest voice their throat can make, and embraced together. Beside ecstasy, my mind was numb.

What do you want to say for the young e-sport fans?
For young e-sport fans, I just want to say you need to improve your knowledge. Nowadays, only being a good game player is not enough. For example, leaning a second language, especially English, is really useful because e-sport is becoming a kind of international industry. And also, I want to mention, it’s hard to become a professional player. If you spend too much time on it and ruin your studies, that’s not worth the candle. Indeed, talent is one of the most important parts of e-sport. To correctly evaluate yourself, it’s not just about your love of a game and wanting to play it as career. I do want to encourage more and more people to know more about e-sport and become interested in it. But, any sport competition is brutal, so o make sure you have some actual skill and then try it eventually.