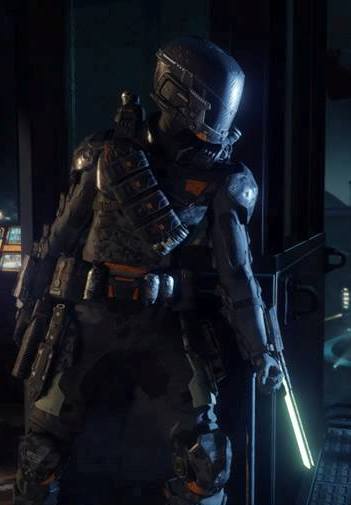 Background: Black Ops 3 introduced a new feature to the Call of Duty franchise – Specialists. The player must choose from nine distinct specialists to play as, pre-made characters with their own unique look and back story that indirectly relates to game play. While the gender, facial structure, and body type of each specialist cannot be changed, players can still customize their avatar with different sets of armor, face paint, etc.

Each specialist has a unique weapon and ability that only they can use. Players pick either the weapon or ability before going into combat; you cannot use both in a single multiplayer match. Specialist weapons and abilities also have a charge time before they can be used. This time gets reduced each time a player racks up points by getting kills, etc.

Below is a comprehensive list of the top five Specialists in Black Ops 3 that even a noob could understand.

Outrider’s weapon of choice is a bow called the Sparrow. I know what you’re thinking – who brings a bow to a gun fight? Well, this weapon comes with a twist: it fires explosive arrows that instantly kill enemies on impact.

Vision Pulse is one of the most overpowered abilities in Black Ops 3, and is often banned in competitive matches. With it, Outrider’s enemy detection is enhanced in three ways for a limited time. First, enemies become completely outlined in red and can be seen through walls. Secondly, small beeps can be heard to alert the player to nearby enemies. And thirdly, all enemies ping on the mini-map.

The Reaper’s Scythe is the ultimate “spray and pray” weapon. Any inexperienced player could wield this weapon effectively. Essentially, the Reaper’s robotic arm converts into a powerful machine gun with a clip of 160 rounds. The Scythe has low recoil and a surprisingly fast fire rate. It takes down enemies in a flash, and can destroy most scorestreaks.

Psychosis is one of the most undervalued ability in Black Ops 3. It allows the Reaper to spawn three clones that run rampant about the map for a short amount of time. While the clones can’t attack, they draw attention to themselves and give the player an opportunity to take enemies by surprise.

Prophet’s specialist weapon has been compared to an overpowered taser. The Tempest is basically a gun that shoots bolts of lightning. The bolts kill instantly on impact, and any enemies standing within close range will also get shocked and die. The only downside to the Tempest is the couple of seconds it requires to power-up before firing.

Ever wanted to travel back in time? The Glitch ability teleports Prophet back to a previous position a few seconds prior to activation. This allows players to evade gunfights they would have no chance of winning and surprise and confuse enemies.

Spectre’s Ripper is an instant one-kill melee weapon that can only be used at close range. It’s nothing fancy when compared to other Specialist weapons, but it’s effective, and with quick reflexes players can chain multiple kills together. The Ripper’s most impressive trait is that it has the shortest recharge time of all Specialist weapons and abilities. The player also retains some of the weapon’s charge even if killed while using it, unlike other weapons where all charge is lost upon death.

Active Camo lets Spectre become nearly invisible for five seconds. All that’s left after activating the ability is a light blue outline and a shimmering figure that can be hard to detect in a fast-paced game like Call of Duty. It’s especially useful for snipers, or  players who are pinned down behind a piece of cover.

Seraph’s Annihilator is a beast of a gun. All shots are a one-shot kill at any range, but this mighty pistol can also shoot down nearly every enemy scorestreak in just a couple of bullets. The Annihilator’s only downfall is that it has a slow fire rate and six-bullet clip.

Enabling the Combat Focus ability increases the amount of points players collect by getting kills, disabling enemy equipment, etc. The added point bonus makes it easy for players to rack up scorestreaks and level up their specialist. There is a cap, however, of 500 points per activation.