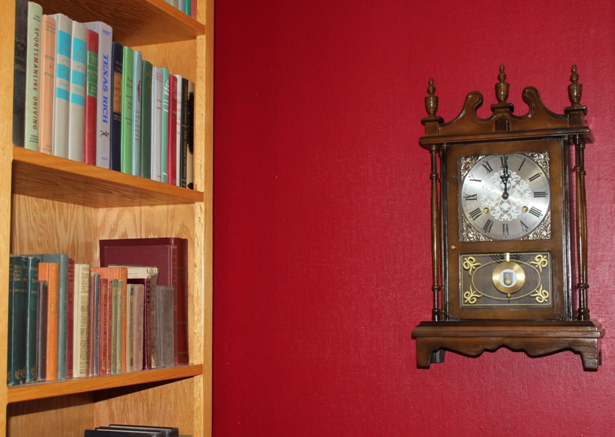 Who knew getting trapped in a room for an hour could be so fun? Escape rooms are popping up all over the Maritimes, their tricky riddles puzzling people from Cavendish to Fredericton. Ben Crouse explores the puzzle game’s ever-growing popularity, while trying to escape himself.

I walked into my first escape room not sure what to expect – would there be bars on the windows? Cobwebs littering corners? Would I feel claustrophobic?

What I saw instead was an average home office. A desk, bookshelves, a fireplace and some tacky paintings lined the walls. It was a typical room – except for the next hour, my teammates and I would be locked in, the only means of escape through solving several challenging puzzles.

We had a minute to take in the room, and then the timer started ticking down. We started haphazardly looking for clues, searching through garbage cans and looking under furniture.

The countdown was on.

What are escape rooms?

Escape rooms are themed spaces that require teams to piece together clues and solve a series of puzzles. If the players can figure out all of the puzzles within the time limit, they achieve the goal – escaping the room.*

The first real-life escape room was created in California in 2006, however, it was just a temporary event. The first permanent escape room debuted in Asia in 2008, and became popular in Europe, Australia, North and South America soon after.

Ottawa is home to Escape Manor, one of the most successful escape room businesses in Canada, featuring nine different unique rooms to play. Escape Manor also claims to be home to the world’s largest escape room: Escape the Diefenbunker. This puzzle takes place in the 100,000 square foot Diefenbunker, a cold war museum and underground bunker.

The first room opened in the Maritimes was in Cavendish, Prince Edward Island.

Julie Pugsley and her husband first discovered escape rooms last August because of Facebook. A friend posted a photo of themselves with a caption saying that they had just completed one of the puzzle rooms on PEI. Pugsley didn’t know what an escape room was at the time, but after a little research soon found out.

At the time, she never imagined she would be opening the doors to her own escape room business just four months later.

“It’s always a huge guess, a big risk, when you’re opening a business and it was kind of scary,’ said Pugsley, co-owner and game manager.

Despite the risk, Breakout Saint John opened on Dec. 18, 2015 with two rooms. It was the first escape room opened in New Brunswick, and Pugsley says business is going great.

“We’ve had lots of corporate clients and groups, which is great because they spread the word.”

“We adapt our games so that middle school aged kids can come play too. They’re made to be challenging for adults, but we just kind of adapt them slightly and provide more hints if younger kids are coming.”

Each of the rooms has a distinct theme; in Prison Break, players work together to deactivate an alarm system to break out of jail. In Trapped in Room 15, you and your team have checked into a sketchy-looking motel after a long day of traveling. Things take a dark turn when the owner reveal’s he’s completely mad, and says you’ll be trapped in the room for all of eternity unless you solve his puzzles and win back your freedom.

A third room opened this part Saturday, called The Mad Scientist, where the team must stop a (you guessed it) mad scientist from poisoning the Saint John water supply.

“We make our rooms accessible for everybody, so you don’t have to have prior knowledge to come in, you don’t have to be a math wizard. Anybody can come play, from young people to, you know, we’ve had some people…probably in their 80’s.”

One of the greatest challenges for Pugsley is balancing family life and work. She manages the business, while her husband Matt creates the puzzles and works full-time as a school teacher. The couple has three children, all aged five and under. However, she says she’s happy they opened Breakout Saint John together.

“The rewards [of owning this business] for both of us, I think, are being so proud that people are having so much fun, and people are really enjoying their experience.”

We flew through puzzle after puzzle, every nerve like a live wire. As soon as we stepped into the room, adrenaline began to pulse through each of our bodies. We were riding that high, and got another rush each time we solved a new riddle.

We were feeling confident. We had solved math, word and observational puzzles – what else could they throw at us? Whatever it was, we could handle it. We were well-rounded, with each team member bringing a unique set of skills to the table. We were going to beat this game in record time, and reserve bragging rights for all of eternity.

And then we hit a wall.

Just over an hour away on Hanwell Rd. Fredericton, you can find Escape Logic Games. This shop opened Jan. 15, and was the first escape room business in Fredericton.

“We’ve tried to vary the puzzles enough that anybody will be able to get at least one puzzle, depending on what type of person you are,” said Joel Beck, who’s official title is puzzle master.

“Some people who are very logical and mathematical, well those are the types of puzzles they solve. But maybe they’re not very good at observing something that’s slightly off or askew.”

Math, logic, word and observational puzzles can all be found within The Study, the only room currently open.

“If you come in with a group of people who are all like-minded to you, then that tends to make a weaker team,” said Kody Belliveau, co-owner of Escape Logic Games.

Escape Logic Games’ second room, The Tomb, will open in two weeks – hopefully. Beck says that this room has been much harder to build and design than The Study; it’s not as simple as buying a desk and some bookshelves. The majority of The Tomb was built from scratch, from the ancient relics right down to the texture of the walls. The puzzles within the room also differ considerably from The Study.

Beck says that the best reward of working for a business like Escape Logic Games comes from the customers.

“The best part is seeing people enjoy something you’ve created. That is just…nothing can really come close to that,” said Beck.

“Here, you get to see people’s faces when they figure something out and they’re super excited about it and jumping up and down. That’s a really nice feeling,” he said.

Unplugged Board Games Cafe opened nearly a year ago in downtown Fredericton. The owner, Travis Grant, says that the business has been doing well, but something’s missing: escape rooms.

Unplugged Presents: No Escape was supposed to be open last summer, but the business occupying the space above the cafe continued to renew their lease longer than expected, pushing the construction of the escape rooms back. Grant has been working on the rooms non-stop since taking over the space, and hopes they’ll be open in two to three weeks.

Along with three distinct room themes, Grant plans to bring a different approach to the escape room business.

“For me and the escape rooms, I want to connect as many businesses as possible. …I think that leads to some really cool business partnerships, and would help grow businesses in the local area in interesting ways that you would never think of,” Grant said.

This isn’t the first time Grant has partnered with other local businesses. This past February, Unplugged partnered with Apple Blossom Florist and The Chess Piece Pâtisserie & Bakery to create a Valentine’s Day package for couples.

“Talking to all of these different businesses one, helps spread the word, and two, gives really cool opportunities for rooms down the road. For example, I’ve been talking to a few businesses who would be interested in having their own escape room themes and stories,” Grant said.

Grant studied at the Vancouver Film School, and has worked on Hollywood sets. He called the process of creating themes for the three escape rooms “world building.”

One room features a ticking bomb that teams must work together to defuse. Another plays out like a heist; you’re a group of thieves hired to steal a particular item from a master thief, and must solve puzzles in order to find it within the room. Finally, the last room is 1960’s themed. Grant described the ’60s room as the most “puzzle-y” of the three.

We had just unlocked one of the final pieces of the puzzle, and we could all tell that the end was in sight. Just one or two more riddles and we would have this thing in the bag.

But now we were stuck. Even with all of the information laid out in front of us, we simply could not take that next step and figure the puzzle out; we had to be missing something. But what?

We frantically searched the room again as our last minutes ticked down. Our hopes for dominating the room were fading as each second ticked by. The earlier adrenaline we had all felt was drying up, evaporating into thin air.

What were we missing?

The clock struck the next hour, and we were officially out of time. I could see disappointment in everyone’s face; we were so close to the end we could taste it. We had missed our chance to be the victors of this escape room – after all, they don’t exactly have any replay value. Once you play a room, even if you don’t complete it, you’ve already solved enough of the puzzles that a replay would be pointless and unfair.

We were out of the running to be the champs…at least until the next room opened.

*It’s important to note that while these puzzle-based games are called “escape rooms”, Canadian laws prohibit any players from actually being locked within a room with no means of leaving voluntarily.