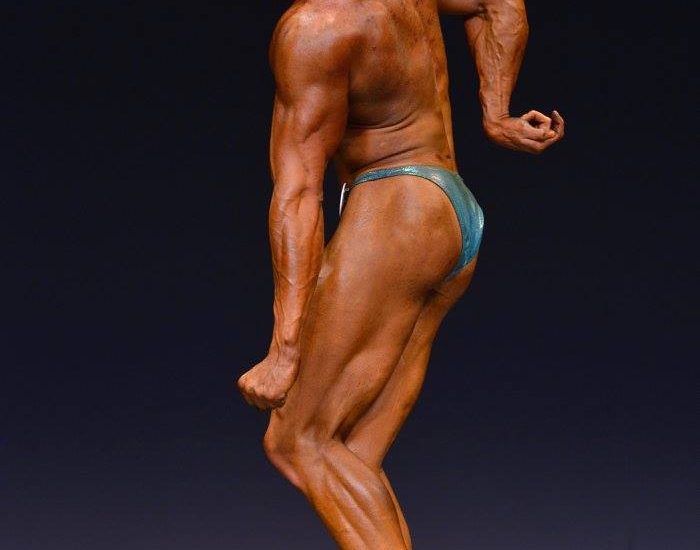 It didn’t always occur to James Vickers that he wanted to be a body builder. Or that he was even interested in fitness. But after realizing he wasn’t sure about who he was, losing interest in the things he used to enjoy, feeling disconnected from his friends, he turned to a different lifestyle and a different life all together.

A day at the gym isn’t what you think

It starts with a long stretch, pushing out the air from his diaphragm. He braces himself, takes a deep breath in and then lets it out. It’s time to pull the weight, it’s time to workout. He straps on 495 pounds on each end of the bar, grips one hand under, one hand over, and deadlifts the weight. He does 10 reps.

That’s a typical day at the gym for James Vickers. He is only 21, and he’s placed in two different competition in his home province of New Brunswick. The first time, he placed third. In the second competition he tied for second

It’s a life he never imagined he’d have. But the life he now has chosen to pursue.

“A typical day at the gym starts before you even get to the gym,” said Vickers.

Vickers was once a guy who weighed only 140 pounds, had long, bright blonde hair. Now, he’s shaved his hair, weighs close to 198 pounds of pure muscle and has joined the military.

When Vickers wakes up for breakfast, he doesn’t just eat, but prepares himself for a day of strength training. His breakfast includes six large-size eggs, four pieces of whole wheat toast, with natural peanut butter and no-sugar jam. For Vickers, his meals are as important as going to the gym.

But weight training is only part of the equation. “As a bodybuilder we like to be strong but weight is secondary. It is only a tool we use to carve our bodies so we always select a weight that is appropriate to our desire,” said Vickers.

He calls his weight training the “big three.” Deadlift, bench press and squat.

And that is where this body building champion gained his ground.

Brenden Demers is also a body builder who has been training since he was 14-years old. He was diagnosed very early with hypertension and began lifting weights to help deal with this issue.

“I started monitoring my diet more to ensure I was getting the foods to keep my body in order. This progressed where I got into bodybuilding because I loved watching my body change,” said Demers.

Demers said its wonderful to be able to transform your body into the way you want it to look. Vickers and Demers feel the same way, and he says that’s why their friends.

In 2013, Demers won CBBF Nationals Junior Class. He won the Junior Mr. Canada title. And that for many young Canadian body builders, is the dream.

Demers met Vickers at a local supplement store in Fredericton called GNC. They knew each other casually from school and acouple of run ins at the gym. It wasn’t until a conversation about bodybuilding that the friendship began.

“He had a very keen interest in it and just wanted to grow huge and still does. I offered to help if he wanted then it went from there with us,” he said.

We all start somewhere…

In high school Vickers was your typical metal-head. He had long blond hair, skinny kid who wore only band shirts and ripped jeans.

But it didn’t stay that way.

He wasn’t sure about where his life was headed. He felt lonely and Vickers wasn’t sure where he would turn.

“I felt alone. Mostly because the interest my friends had didn’t really align with my own. It was intentional but I felt isolated and that we weren’t on the same page anymore so going off to somewhere different was lonely and uncomfortable at first,” said Vickers.

Vickers said he had lost touch with the things he used to enjoy in high school and when he lived in small town New Brunswick.

A lack of confidence and purpose in his life had him searching for something to really be passionate about.

Vickers said having low confidence and losing touch with the people you care about can be tough. But finding meaning in different things allows you to take the steps towards fulfilling a dream.

He said fear kept him from moving on from who he was. It was about making himself uncomfortable before he could really move on.

And it was the choice between walking in the same direction or towards the gym.

“So one day in Rigby Hall after getting my school work done, instead of knocking on the door of the people who I felt like I had to make like I decided to take a walk to the gym by myself and see if I’d like this to on my own spare time,” said Vickers.

“It wasn’t until I got to university, in second semester, I was honestly just kind of lonely, I didn’t have the same interest as my friends no more, and I more just took it up as something to kill time and then as I kept going and going. Back home, I talked to Jamie [a local bodybuilder], he owns the gym, he said, ‘well buddy, if you’re going to put so much time into it, why not try competing?’ That was the first time the idea had ever been brought up to me and I thought well no, that’s kind of foolish,” said Vickers.

He doesn’t think so now.

Demers said when he met Vickers, it was like he was seeing himself in a mirror, the typical metal head coming from a small town ready to grow, mind and body.

“He looked the same, having long hair and dressed like a metal head with an eager mind and body to get into bodybuilding and wanting to do it properly from the get-go,” said Demers.

“He has such a strong personality and it would be easy for people to be taken by him because of his positive vibe that he always puts off,” he said.

And Vickers said that positive, hard-working mentality has followed him since was a kid.

“I found what really drove me, when I was younger my Dad always preached be the hardest worker in the room, always give it your all,” said Vickers.

Vickers said he has had to learn to care less about what other people think.

It’s a lifestyle, not a diet. It’s a gym, not a second home.

Vickers, like many bodybuilders, follows a strict set of dietary rules. A common misconception, he says, is that people believe it’s all about spending hours and hours at the gym, but that’s not true.

“A typical day at the gym starts before you even get to the gym. It’s the entire day, and I think that’s the biggest misconception most people have. It’s a 24-hour thing. I like to have two or three meals in before I start or else I feel sluggish,” said Vickers.

“That’s another common misconception, unless you’re socializing you shouldn’t be there crazy periods of time,” said Vickers.

Nutrition is very important, if not more than spending the time at the gym.

“I have six meals in total a day, that’s not including the shake,” said Vickers.

Competing has it’s ups and downs…

But he didn’t stop after his early success. “The question started to haunt me a bit, and I figured if I’m going to put all the time into it, why not get some reward out of it, you know,” laughed James.

His second place competition was bitter sweet for him, as he narrowly missed first place. However, getting second place is a victory he won’t ever forget.

But with the high, comes the lows of preparation. A big part of getting ready for a competition is dehydration, tanning and teaching your body how to flex in the most austere way.

Every competitor is required to pose in a least four or five poses to show off the areas they will be judge on. Their bodies are sculpted like a piece of clay; they flex, and like a pop up book, muscles appear. Their dark bronze skin makes the muscles more defined, like the sculptures in a museum of fitness art.

“My God, it was one trip, but once I stepped on stage I fell in love,” said Vickers.

Losing water weight before a competition is a common strategy in the bodybuilding universe.

“Last couple of weeks, you’re trying to stay full…last week goes into a lot sodium and dehydrating your skin, you might drink eight litres at the beginning of the week, and by Friday, the show is usually on Saturday, you drink a liter before the show, and one the day of, but you’re drinking nothing.”
“It’ll get so bad your tongue will be sticking to the roof of your mouth and you have to have Vaseline or something to go on your lips so your tongue doesn’t get stuck to it,” joked Vickers.

He said that despite those ups and downs, from Vaseline in your mouth, to gross spray tan, to even wearing that weird underwear he never thought he would, nothing is going to stop him now.

Where do we go from here?

Demers said Vickers has made tremendous progress, and he sees that in him every day.

“He is succeeding so well in his bodybuilding career. I love that his attitude towards the sport is so positive and he is the kind of person that is needed in bodybuilding,” said Demers.

Vickers was told people aspired to be like him. He said he was speechless for a response, and that that kind of response makes him feel like he is doing exactly what he should be.

“I love walking around home and seeing my trophies. Starting to get a little collection of hardware going up. Got three so far…” said Vickers.

Vickers said he has always been supported, and it makes him feel much more accomplished.

“I do love it. As crazy as it might seem to dehydrate yourself and do that day in and day out, I love it,” said Vickers.

And it is a good thing he does love it, James is seen as inspiration to friends and fans alike. Especially to Demers who has seen him grow in and outside of the gym.

“He is definitely an inspiration and I want to see him grow more and accomplish what he wants with it. This is something that I see him doing because he has a great work ethic and stops at nothing to achieve his goals,” said Demers.

And that couldn’t be more true.

“I’ve always been a person if I want to do something or I want something I’m going to do it, and God himself would have to strike me dead to stop me,” said Vickers.

But what’s next for this unstoppable force?

Mr. Junior Canada is on James Vickers’ mind, and he has the willpower and the body to pull it off.

“My big plan is I can qualify for nationals, and I would love to represent New Brunswick,” said Vickers.

Vickers said he has two years to prepare for this competition. For Vickers two years means nothing if he can come home with the title.

“Just keep my eyes on the goal, and you can show up next year from the summer and say look at this hard work that I put in, so just keep at it, and don’t care what other people are saying or ‘negative nancys’’, just don’t think of them,” joked Vickers.