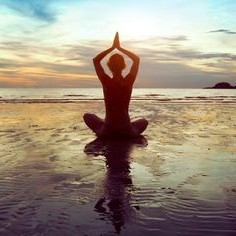 It’s all about stretching. Stretching the mind. Downward dog elevates muscles you didn’t know were tense. The breaths are deep, your mind clears and the sweat drips down your body. It’s yoga, and it’s more then just exercise.

I was the kind of person who thought yoga was silly. It’s like most fitness routines it comes with it’s own set of stereotypes. And I personally, didn’t want to be apart of it.

But in the spirit of journalistic research, I wanted to experience it. And it changed my whole perspective.

I have a lot of anxiety and many people say that yoga helps creating a calm mind and body. Relieving anxiety, and that was something I had to try.

Yoga is the practice of stretching your muscles, often use yoga as a method to relax. It can be used as a complement to any regular exercise or just as something you want to do to keep on top of your health.

Yin yoga is the beginner class. The room sits at 40 degrees, design to allow the body to sweat out negative toxins. The poses in this class are usually held for three to five minutes at a time.

Dynamic Yoga, located downtown, is a yoga studio and boutique that specializes in from yin yoga to athletic-a yoga. They have many classes at different times of that day.

Kathy Hossack, an instructor at the studio, can do up three or four classes in an evening. She said it makes her sweaty and gross, but she loves it.

“I like yoga. It’s a great form of exercise to keep you flexible, to keep you strong and to help you settle both mind and body,” said Hossack.

Who that day had done three yin yoga classes back to back and though she said she felt gross from the sweat was loving the experience of showing people the beauty of yoga.

Hossack said that allowing your body to sweat and stretch eases anxiety in both a physical and chemical way.

It’s a spiritual experience too

Yoga allows a person to not only loosen tense muscles because you can sweat out toxin and release negative energy.

Yoga is guided by the Hindu philosophy. Mind, body and spirit are seen as one.

Kali Schroeder started exploring yoga and never knew how much the philosophy of yoga matched up with who she is.

“I realized there was more to it then just the physical aspect, and then I kept going back,” said Schroeder.

“I get a very spiritual aspect, I was never really like a religious or spiritual person before I started yoga but I became really fascinated with like yoga philosophy, and I realized a lot of my values as a human being aligned with the principles of yoga and Buddhism and Hinduism, I don’t call myself a Buddhist or anything but I meditate, I worship certain deities’ that kind of thing,” said Schroeder.

And as I learned more about the experience, the more I learned to love it. The more I was able to understand how the many aspects were able to ease people nervous energy the more I wanted to find out.

Emily McPhee has been doing yoga for a long time and says she like any physical activity you do it takes time and focus and of course patience.

“I feel like if I had started yoga in my first year of university I would have been better able to handle stress and workloads… I find, I run also so I find when I’m very frustrated about a paper, I will literally just get up from my chair, throw on my shorts and bust out the door,” said McPhee.

She said it allows her to recognize when things within her body don’t feel the way they should.

“Or I’ll just get down on the carpet and say ‘ow’, that muscle hurts, why, how do I make it not hurt and before you know it you’re lost in your own head with your body,” she said.

I could just stop there though, I wanted to know more about this fun new exercise I had only experienced once but was already falling in love with. A junkie from the first try.

Alina Cress, a program coordinator and yoga instructor from the Currie Centre here in said yoga can really help you in your every day fitness and health regiment.

She said it’s about breathing and understanding your body. That breathing allows you to focus, draining away any negative energy you have gathered that day and move past it. A lot of modern medicine sees mental illness treated with medication, but yoga may be alternative method for treating some disorders.

“Simply by taking deeper breaths allows you to calm down and relax, which all help with mental health,” said Cress.

Being mindful of your surroundings and your body allows yoga to really help you become more relaxed body, mind and soul.

“Mindfulness is something that is becoming very popular out in the world of self-care and its one component of the three-tiered practice of yoga, so, to be aware of yourself to be aware your surroundings and not to be pulled away by just one thing,” said Cress.

It truly is something I thought I would never try, but after sitting down with people who really do love it, I’ve developed a fondness for it myself. After trying it, my eyes were open to the idea it might be worth trying again.