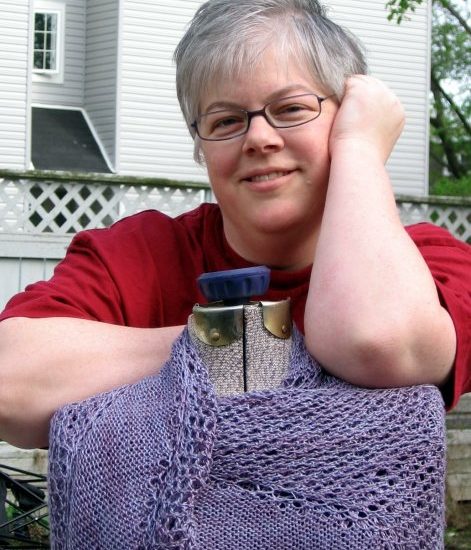 Kate MacKay has been knitting hats for refugees who have landed in Fredericton. It is only the most recent of her volunteer experience. She uses her spirituality as a core motivator. Jordyn Meade-Baxter talked to MacKay to find out a little more.

No. For just over 30 years, I worked rotating shift work which really precluded being able to consistently commit to anything – volunteering, joining a bowling team, whatever. Other than occasionally canvassing for the Cancer Society, volunteering has been something I’ve only been able to engage in since leaving the paid work force five years ago.

The simple answer is because it needed to be done. That and the fact that I can rock a set of knitting needles…

The considerably longer answer is about fundamental values – things I consider important. One of those principles is that the suffering of anyone anywhere diminishes my happiness. I will have the greatest happiness if there is no suffering anywhere. Furthermore, it’s my responsibility, as it is yours and every single human being, to do what we can to alleviate the suffering of others until all are free from the pain of war, hunger, poverty, illness and death.

Through horrible circumstances of war and international strife, we have so many people in this world who displaced from their homes that it simply staggers my imagination. I cannot comprehend what this truly must mean in the particular but because I am human, I understand what it means to suffer. I can feel WITH these people about pain and loss. It’s what the word “compassion” means… to suffer with. And the fact that I am not capable of relieving every single bit of suffering in the world, does not relieve me to the duty to do what I can. So many people use that as a cop-out…it doesn’t fly.

In Canada it really is our job, our responsibility, our duty, to open our hearts and our home and our country and receive these people with all the compassion we can muster. At the same time, I believe in taking action. I have very little patience when “praying for peace” is the only offering people are willing to make. It strikes me as cheap – action is what counts. What can I do to help alleviate some of this human suffering? That is the question…

So, when a woman in Quebec came up with the genius idea of knitting a hat for every single refugee arriving on our shores as a welcome gift, I was in, all in. The Quebec group used the tag line something along the lines of “Welcome to Quebec where the only enemy is the cold…” I liked that a lot. It’s about welcoming a person, a family, into the Canadian community. “Hi, welcome to Canada. It gets bloody cold here in the winter; wear your hat.” We’ll get to the bit about keeping your stick on the ice and not tearing your socks next year.

More or less, I’m a run-of-the-mill, no-brand-name, garden-variety, non-sectarian, possibly secular Buddhist practitioner. I don’t strictly follow any particular Buddhist tradition but have been fortunate enough to be able to read and study from Zen teachers, Tibetan teachers, Theravadan teachers and some American academic Buddhist scholars. These are all major streams of Buddhist tradition and thought. I’m lucky – I was born in North America. I’m afforded the privilege of having the time and resources to read, travel in some cases to study with a teacher, to have time and space to be contemplative. It’s a very privileged existence. I did nothing to deserve it and yet, it’s 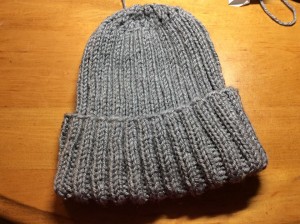 mine for the taking.  So few people, so few women in particular on this planet, have the luxury of this. I think it would be a sin to let the opportunity pass without putting at least some effort into it.

Knitting hats wasn’t volunteering; it was my duty.

Like all human beings, I’m long on intention and frequently short on follow through … but as I get older, I’ve become more aware of how my actions, my words, can impact other people. I have a very sharp tongue; I’m quick to anger. I can be bloody judgemental. I try to curb this. I try to practice little kindnesses throughout the day – with no consideration of being “paid back” or any such foolishness. And really, Buddhism is about practice, not belief, at least my interpretation is.

I guess my bottom line is I try to be kind. I fail frequently but the up side to failure is you can always start anew and give it another shot. There’s no limit to how many times you can hit the reset button.

The word “dharma” is a rather complicated concept in Eastern philosophy. It doesn’t translate directly into English but it encompasses many ideas, including: duty, righteousness, the Law. To practice the dharma is to follow this set of spiritual laws – one of which is generosity. Generosity, or “dana” as it is called in the Pali or Sanskrit languages, is considered to be a cure for greed. According to the teachings of the Buddha, all the ills of the world come down to three sources: greed, hatred and delusion. If we could get rid of those poisons, we would have a pretty wonderful society. So to remedy greed, the Buddha recommends cultivating the practice of generosity – giving to others without an expectation of it being reciprocated. Personally, I think it helps – or at least has helped me control my greed.  So in that respect, knitting hats was therapy of me.

Buddhism is not big on beliefs and neither am I. You can believe anything you want and my mind can generate a 1,000 delusions an hour for me to “believe.” What counts is your action. How do you behave? You can believe in whatever deity you want but if you spend your days robbing pension funds, you’re not a very nice person. So let me re-write the question: how do I think everyone should act? That’s simple: be kind. “Be kind for everyone you meet is fighting a hard battle” – a quote often attributed to Plato or Philo but probably more accurately John Watson, a Scottish minister and author.