Although perhaps best known in the social sciences for his Yankee City series of books, W. Lloyd Warner’s first ethnography was his still-impressive A Black Civilization: A Social Study of an Australian Tribe, first published in 1937. Based on fieldwork conducted in northern Australia in 1926-29 with people he called “Murngin” (who now refer to themselves as “Yolngu”), A Black Civilization is among the earliest and most influential early ethnographies of an Australian Aboriginal people, one characterized by detailed data and a sophisticated theoretical framework. Although clearly dated, A Black Civilization still holds up well today, and remains essential reading for anthropologists working with Australian Aboriginal people. 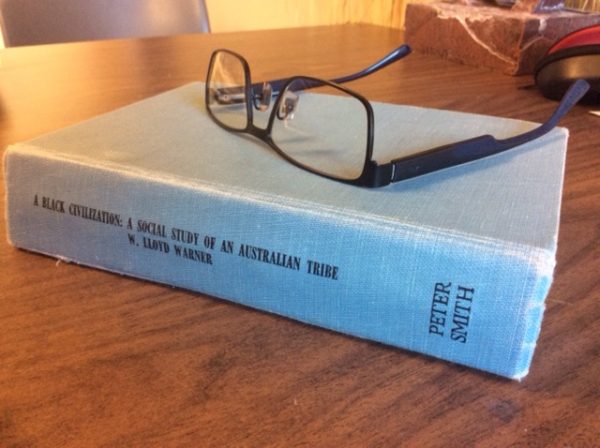 In many ways, Warner was a product of the age in which he lived and worked. His approach to matters of local organization and social structure are clearly indebted to British structural-functionalism, most especially his supervisor in Australia, A.R. Radcliffe-Brown. In The Social Organization of Australian Tribes, Radcliffe-Brown stipulated that the most important social units among Australian Aboriginal people are “(1) the family, i.e., the group formed by a man and his wife and their children, and (2) the horde, a small group owning and occupying a definite territory or hunting ground” (1931: 4). In stating that the horde is a land-owning, patrilineal, and exogamous group, Radcliffe-Brown set in motion a systematic conflation of the local group and the “clan”, which can in fact be quite different from one another and can be based on quite different principles of sociality. In emphasizing the significance of the family, Radcliffe-Brown focused on the nature of the wide-reaching classificatory kinship system, especially kinship terminology and the reciprocal behaviours expected of individuals in particular kinship relations (ibid.: 12).

In his emphasis on the “clan” as a primary unit of social organization, Warner departs from Radcliffe-Brown to some extent. Warner indicates that the clan is an exogamous, patrilineal group that owns land in common, as well as a number of totems related to the land, but states that only male clan members may be permanent occupants of the clan’s territory (Warner 1969: 16), and that all of a clan’s married women go to live patrilocally on their husband’s territory after the first year or two of marriage (ibid.: 19). In this recognition Warner very importantly departs from Radcliffe-Brown, in that the latter assumed that land ownership and land occupation were the same, whereas Warner identified a principle whereby a clan-based spiritual connection to land and the occupation and use of that land overlapped, but were not exactly the same thing. Nevertheless, a focus on the “clan” as the primary unit of Aboriginal social organization has led to its own set of interpretive problems, with alternative interpretations and correctives offered by Hiatt (1965), Myers (1986), and Keen (1994, 1995). Warner further departs from Radcliffe-Brown in giving only slight attention to the “horde”, calling it an unstable economic group that varies considerably in size and composition depending on the seasonal cycle (1969: 127), although it is composed of members of closely intermarrying clans (128). On matters of family and kinship, Warner follows Radcliffe-Brown more closely in his attention to kinship structure, terminology, and the normative behaviour expected between kinship reciprocals (father-son, brother-sister, etc.).

A particularly fascinating chapter of the book is on “Warfare,” a social institution that was clearly important in Warner’s time, but which is no longer practiced (although contemporary Yolngu memories of animosity and feuding between groups still affect sociality to some extent). Warner is unequivocal about its significance:

Warfare is one of the most important social activities of the Murngin and surrounding tribes. Without it, Murngin society as it is now constituted could not exist. Any social change consequent upon the loss of the trait would demand a decided alteration in the fundamental structures of the civilization. Warfare prevents modifications in the society that would possibly destroy it. (1969: 144)

For Warner, warfare was a primary determinant of sociality, as he states that it is the clan that is the largest social unit without internal armed conflict, but which makes war on other groups. Because the main motivation for inter-clan fighting is not land (which cannot be ceded by force of arms among the Yolngu) but rather competition for women, as a result it is more common for clans who share mythological bonds to be those engaged in conflict, as those groups may also seek wives from the same sources due to clan exogamy and the moiety system (two clans of the Yirritja moiety, for example, may be connected through the mythological journeys of certain ancestral beings and therefore cooperate in ritual, but members of those two clans also may seek wives from the same Dhuwa clans, putting them into potential conflict with each other). Warner also accounted for the possibility of age-based polygyny (where relatively older men were married to most younger women, leaving most young men without a wife) as a function of regular feuding (ibid.: 147), as even a small number of deaths among young men could reduce demographic pressure on the marriage system. Warner postulated that the cessation of warfare would increase the proportion of marriageable men in the population and would likely do away with age-based polygyny as a system. Methodist missionaries who arrived in northeast Arnhem Land at around the time Warner worked there were in fact successful in substantially reducing warfare and feuding, but high levels of age-based polygyny persisted for at least another generation, likely because older men could still dominate marriage arrangements by controlling access to religious knowledge (Keen 1982). But it seems to me that the full societal impact of the end of warfare as a widespread social institution among the Yolngu has yet to be systematically examined.

Warner’s detailed account of the history of one particular extended “clan” feud (ibid.: 166-179) makes for fascinating reading, and his own conclusion is that “clan” solidarity is very important, but that the kinship system breaks down these solidarities (ibid: 179). A close analysis of this feud certainly bears this out. The “clans” involved include the Dhalwangu, Warramiri, Ritharrngu, Madarrpa, Guyula Djambarrpuyngu, Marrawungu Djambarrpuyngu1, Ngaladharr Djambarrpuyngu, Daygurrgurr Gupapuyngu, Gälpu, and Marrangu, among others. A Dhalwangu man killed a Warramiri man over a woman; a Ritharrngu man killed another Dhalwangu man as an act of revenge, motivated by mythological connections between the Ritharrngu and the Warramiri. The deceased Dhalwangu man’s father-in-law sends goods to a Madarrpa man to solicit revenge, resulting in a Madarrpa man killing a classificatory brother of the Ritharrngu killer, which in turn results in that man’s father’s brother killing the Madarrpa man’s father, who had received the goods from the Dhalwangu man’s father-in-law. A separate series of tit-for-tat killings between the Guyula and the Marrawungu and Ngaladharr leads eventually to the killing of yet another Ritharrngu man, the brother of the man killed by the Madarrpa man. This leads to a Marrawungu man killing the Madarrpa killer many years later, spurred on by a pair of Dhalwangu men, which leads to him being stabbed by a Gälpu man, after which he stabs a Marrangu man before disappearing into the bush. The Marrawungu settle with the Gälpu man by subjecting him to a makarrata peace-making ceremony, which concludes with the culprit being speared in the thigh. If this all seems incredibly complex, that is simply because it is incredibly complex. In my analysis, however, it seems clear that the “clan” is not an analytical unit that can adequately explain it, at least not compared to an individual’s kindred. Affinal networks played a significant part in how these events transpired, and indeed Warner himself noted that competition for wives motivated much feuding and that different affinal networks within a single “clan” led to different allegiances. “Clan” identity certainly seems to play a role in motivating social action, but it is only one relevant identity among many. If “solidarity” is the glue that holds social groups together, those groups are not “clans”, but rather networks based on kindred.

Warner’s later chapters on magic, totemism, and ritual owe a great deal to Durkheim’s analytical framework in The Elementary Forms of the Religious Life (1965), but greatly augment this framework based on his detailed and first-hand ethnographic research. Even where he is critical of Durkheim, he seeks to improve upon Durkheim’s basic analytical framework rather than to replace it, as when he indicates that Murngin magic functions the same way as ritual (ibid.: 219). Indeed, Warner’s analysis of totemism runs to about ⅓ of the total length of the book, and must have been something of a tour de force when first published. Developing an extremely detailed account of the connections between the Wawilak myth (“The Wawilak myth is of extreme importance to the Murngin and is always present in their thinking” (ibid.: 238)) and its related ceremonies (the Djungguwan, the Gunapipi, the Ngulmarrk, and the Mandayala), Warner explicates the story of the Wawilak Sisters and its main themes (equating the myth with the libretto of a Wagnerian opera). He then analyzes each stage of four different but linked ceremonies, juxtaposing his own descriptive passages with sections of “native interpretation” for each major stage of each ceremony. His overall concern is to demonstrate that mythology and ritual function as “the expression of social logics” (ibid.: 234), but he seems often to be trying too hard to be Durkheimian. In his chapter on “An Interpretation of Murngin Totemism” Warner writes:

The spiritual life of a Murngin…is entirely made up of totemic elements, and his whole participation within that part of the community which makes him a social man…is within the totemic complex itself… As a male social personality, a man is part of the totem, and in all his social relations with the male part of his group he is identified with the totem… It is the sacred tradition of clan groups, as held in the minds of the individuals of the adult male age grade…which forms the totemic configuration. The group in this sense does unconsciously worship itself. (ibid.: 380-81)

Clearly, attention to individual agency is entirely lacking here, and we know from subsequent work on Yolngu religion that individual interpretive freedom is an essential part of negotiations over religious doctrine and practice (Keen 1994). Yolngu spiritual life cannot be reduced entirely to “totems” in isolation, as they form part of a much broader land-based system of cosmology. Warner’s analysis specifies the symbolism of every major aspect of ritual in relation to mythology, without providing an explicit justification of why everything in ritual has to “symbolize” anyway, at least in the way he proposes. Warner’s conclusions about the relationship between the Wawilak myth and its related rituals and the cycle of seasonality between wet and dry seasons represents an elegant analysis and has merit, even if one can reasonably critique certain aspects of his overall analytical process.

There is much more to be said about this quite fascinating book. It is somewhat dated now, but retains its importance in the Arnhem Land ethnographic literature because of how groundbreaking and comprehensive it was at the time of its publication. Radcliffe-Brown and Durkheim were clearly the two most important intellectual influences over Warner’s interpretations, but it is equally clear that he offered corrections or amendments were necessary, and above all that he sought to fill out their theories with the robust ethnographic data that they lacked. On a more personal level, it is also an important book because Warner’s informants are among the most distant ancestors that my own Yolngu research collaborators memorialize by name in their own oral histories, and in some cases knew personally. In that sense, A Black Civilization opens a door on an era that contemporary Yolngu may still discuss as a threshold to community memory.

1 Although Warner uses the name “Djirin” to identify this group, the fact that he identifies Banggaliwuy (Bengaliwe [sic]) as a Djirin clan member (Warner 1969: 171) indicates that members of this group now identify themselves as Marrawungu Djambarrpuyngu.