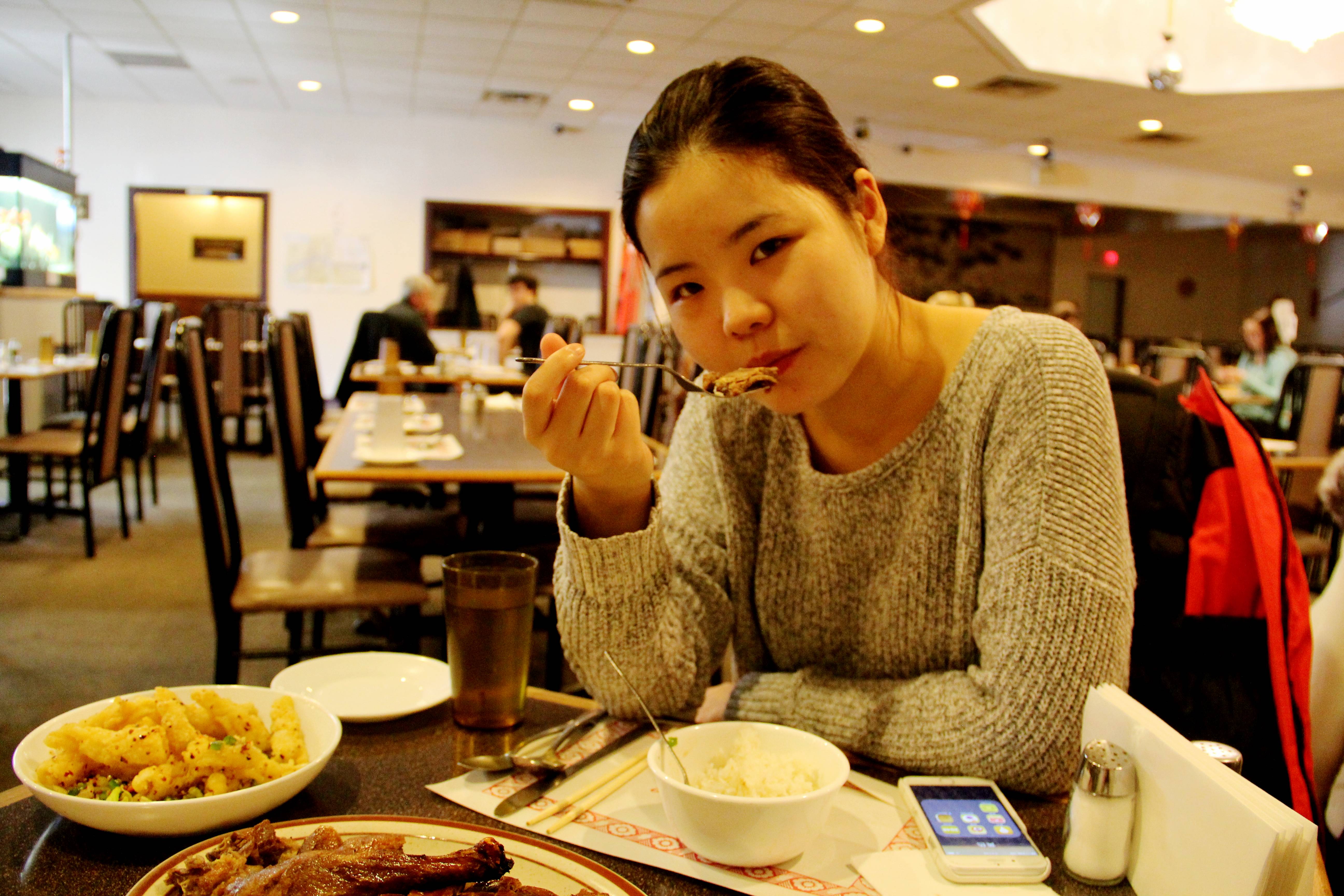 While the owners of New Brunswick’s Chinese restaurants work long and hard catering to tastes differing from their own, they rarely make the news for positive reasons. But the Aquinian’s Sherry Han thought their stories are worth telling and found their pride, warmth, hard work and, most importantly, food helped her connect with both the immigrant experience and home.

Stepping into Mandarin Palace, you find yourself transported to an ancient palace across the Pacific Ocean right in the middle of China. Staff are neatly attired in traditional Chinese finery. There are antique pendant lamps, elegant wall scroll calendars, Chinese artwork and calligraphy adorning this establishment.

“We put our heart into the decorations,” Tina Tu, Mandarin Palace restaurateur, said. She likes the decor as it is: not too fancy with a warm homey feel.

“Many Chinese students came here frequently and chat with me. Most of the time, they aren’t only my customers but also my friends.”

However, nothing gold can stay. The bear meat incident happened.

When I asked about it, Tina Tu’s eye leaked with pain, depression, and grief:

“Over the past four years, I still can’t let it go. Many people have misunderstood about our restaurant and Chinese that make me feel really upset,” Tu said.

Around Christmas in 2011, Tu’s hunter friend presented some bear meat as Christmas gift. It was the first time she got bear meat, so she wanted to entertain her mom, who lives in Ottawa, with it. She put it into the kitchen fridge and didn’t realize what would happen next.

Tu wasn’t in the restaurant when it happened.When she arrived, media and police cars flooded the area.

“I was scared and feel wronged,” Tu said, and tears filled her eyes. “I saw some people slander Chinese eat all kind of animals, and we used bear meat in dishes. But, I never do that.”

Tu had been ill for quite a while and didn’t want to see others. The support from frequent customers encouraged her to continue running this restaurant.

“At least, there are still some people who love and trust the food you serve. What I can do is to make the service and the quality of our food better,” Tu said as she dried her eyes with a tissue.

I am an international student from Shenzhen, China. I’m usually the only Chinese student in my classes. When classmates ask about authentic Chinese food, I usually don’t know how to answer. Mostly what I find here is Chinese restaurants catering to Western tastes, lots of frozen food fried and drowned in overly sweet sauces.

It is not what I’m looking for when I think of food from home.

Still, I wonder. Who were the people running these restaurants and experimenting with different styles? What were their stories? Could they help people like me feel more at home in Fredericton?

Can these people help people like me feel more at home in Fredericton?

The Jubilee Super Buffet Restaurant is the largest buffet restaurant in Fredericton. Over 100 items of all-you-can-eat Canadian and Chinese Cuisine are attractively arranged on a long table, classified and arranged from appetizers to desserts. Soup is placed on a soup tureen and hot entrees in chafing dishes to keep them warm.

The signature dishes, including egg foo young, sesame shrimp, BBQ duck, and chicken chow mein, are all eye-catching and mouthwatering. First-time patrons and long-time customers alike are frequently stunned by their colorful presentation and tempting aroma. Little salt or oil is used in the food preparation, and steamed dishes are also available upon request.

Garlic spare ribs and sesame shrimps are two of the most popular items at the restaurant and are highly recommended by Joe Siu, owner of the Jubilee buffet and part of a new generation of immigrant businessman.

In 1992, Siu’s friend went to Ottawa for a few years, starting his own business in Fredericton. Hiring is always a problem with start-up restaurants, so he invited Siu to become his cooperative partner.

In the beginning, Siu wanted to open an optical shop; he used to be an optometrist in Hong Kong. However, the certification requirement takes three years to get.

“I already worked for it for 10 years in my hometown; why do I need to spend that time to get a certification to do something I am skilled at?” Siu said.

Jubilee has been serving food for over 15 years. The ingredients of Chinese food are still problematic for them.

“There are not real Chinese food materials in here, so all the ingredients need to be transported bi-weekly from Toronto. I know all Chinese restaurants are doing the same thing,” Siu said. “It is hard to maintain this huge scale of buffet. But you’ll feel satisfied when more and more Canadian love Chinese food. It’s like a kind of special connection between Canadian and Chinese culture.”

Busy is the first word that came to mind when I met Jingjie Yue, the Arom Chinese Cuisine restaurateur and chef. It must be the longest interview I’ve ever had. As a chef, Yue only can smile apologetically when called, and go to the kitchen. Yue didn’t even know how to cook before he opened Arom four years ago.

“Most of the Chinese restaurant is opened by investment immigrants and second or third generation Chinese immigrant. Unlike them, I’m an international student and graduated from UNB in 2011,” Yue said.

Yue originally wanted to go back China, but his girlfriend, now his wife, had already found a job in Fredericton and applied for immigration.

“I love her and couldn’t leave her alone,” Yue said. “My friend told me the previous owner want to sell this restaurant, so I took it over in 2011.”

Every time Yue hires a new Chinese chef, he will stand beside to see the cooking steps of each dish. During the first two years, Yue was also the cook’s assistant.

“Three years later, sometimes I cook better than the chef. I just wondering why not cook it by myself?” said Yue.

Peking duck and Arom special fried rice are two of the star dishes at the restaurant innovated by Yue. By using a mallard duck rather than the usual Peking duck, the result has a slightly chewier texture delivering sweeter, gamier flavours. Its smoky, succulent wildness is reminiscent of an old-fashioned roasted goose, yet keeps with the taste for the exotic of their monied clientele.

The steamed rice is stir-fried in a wok and mixed with eggs, vegetables, roast pork, and shrimp. The egg is scrambled separately before mixing with the rice so that the rice becomes covered with a bit of egg—called “bronze covered gold.”

But Yue is new generation of Chinese restaurant owner. Unexpectedly, he tells me he might decide to sell the restaurant in a few years to spend more time with his daughter.

“Though each year’s profit is increasing, running a restaurant is too busy. My daughter is two years old now; it’s one of the most important periods for her. I don’t want to lose this valuable moment with family,” Yue said.

Close your eyes and think of Chinese food. Conjure up the tastes, sights and smells in your imagination.

If the scene in your head includes chicken balls, little packets of duck sauce and a happy Buddha made of fake jade, then Asia’s Best Cuisine restaurant might change that.

The restaurant specializes in food from the north of China and Korea. The sign in the front window proudly advertises, in Chinese, “Authentic Dongbei food.” Authentic, of course, is the key word.

Dongbei-style food is characterized by use of pickled napa cabbage, potatoes, carrots, also wheat and corn instead of rice. It is far less pepper-intensive than most Chinese cuisines, like Szechuan.

Wang and her family immigrated in 2006. Before the move, they didn’t know how to cook and never thought about opening a restaurant. Wang’s son, Andy Wu, was 14 when he arrived Canada. As a kid, he found it hard to adapt.

“I mean fries and burgers is good, but my sister and I just couldn’t get accustomed to Western food at the beginning.”

Wu’s aunt learned how to cook home-style by researching recipes online and following step by step. She let others try her dishes and compare them to dishes they ate back in China.

“I still can remember some dishes she made for us that was really mouth-watering,” said Wu. “My father became continuator of all her cooking, so I think the reason why we never change our dishes to Western taste is that it’s kind of a unique family taste. All the food in here was originally made for someone you love. That’s amazing.”

Every sauce is homemade. Every ingredient bought fresh and seasonal. They encourage home-style dining, with everyone at the table sharing their food.

The cooks at Asia’s Best Cuisine use many steps to draw flavor from their ingredients. Much of the meat is cooked on the bone in order to draw out flavors.

One dish includes an authentic version of sweet and sour pork known as guo bao rou. The Dongbei-style version uses pork tenderloins in place of thinner slices, which are coated in potato flour, fried crispy and covered in a thickened sauce that includes sliced ginger. The sauce hits a perfect balance – neither too sour, nor the overly sweet version many are familiar with. You’ll never view Western “Sweet & Sour Pork” the same.

Although many of their core diners are from China, more and more Canadians are coming. Wu thinks maintaining the quality is more important than catering to local tastes.

“With the globalization, people become open minded. Believe it or not, lots of Canadians are crazy about authentic Chinese food. Food has no national boundaries.”

There’s not much Chinese decorative art and furniture, no pleasant soft background music, not really much advertising outside.

You have to know what you’re looking for to find it. But for me, it’s like going back to an authentic Chinese restaurant and having real home dishes.

It’s when you taste something from home that sometimes you find it.