With roots in Japanese gang subcultures, stance can be functionally ridiculous and cartoonishly cool. Cody Peters explores how this vehicle modification trend is increasingly becoming the way to rebel in a cookie-cutter car era.

When I first met Daniel Clark I was in town meeting up with all the other local car enthusiasts in the parking lot of a gas station. I got there early and was standing around shooting the breeze with everyone. As dusk came on I could hear this obnoxious exhaust note in the distance. As the sound came closer I could hear the car being beat off the rev limiter. But then I saw one of the most unique cars to ever hit the streets of Fredericton. It was a lowered almost touching the ground, had rust for a paint job, paper Mache comic book pages on the front bumper, and an exhaust stack that came up just short of the trunk lid. All of this was done to a 1999 Honda Civic. 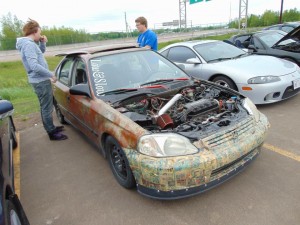 This car is a perfect embodiment of Dan Clark. Built with the laissez fair, no-fucks-given, kind of attitude. I was there when he cut his suspension with a plasma torch to make it lower, or the time he showed up to our local meet up spot waving his hands out of his crudely cut sun roof that he did on a whim. But this car is a little extreme when it comes to the art of making your car as low as it can be without ruining its drivability. This art is called stance, and it’s a constant battle between form and function.

“What made me interested in stance was going to the local car shows around Fredericton and Moncton and observing the many styles of stance and appreciating the amount of work that these people put into their cars,” said Clark. “What made me want to stance my car was being able to share my passion of cars with my friends. Also watching Mighty Car Mods on YouTube helped me steer towards the stance culture.”

Stance has been around for in Europe and Asia since the 90’s but it’s only really gain traction in North America in the past 10 years. Stance culture originated in Japan by drifters and outlaws groups like Japanese Bosozuku. For drifters, the lower they could get their cars to the track the more grip and handling they could get. But for groups like the Bosozuku, lowering a car made them stand out from the rest of the domestic vehicles on the road.

Originally group started out as a post-World-War-Two motorcycle gang, comprised mostly of teenagers. The age limit for driving a car in Japan is 18, so the only option at 16 is a motorcycle. Japan’s rebels without a cause, adorned themselves in suits that resembled the Japanese Kamikaze pilots. It was done with that ‘stick it to the man’ mentality.  They would drive around in their non-conventional motorcycles making excessive noise with their exhausts stand up to three feet in the air by rapidly and repeatedly pushing in the clutch then almost simultaneously hitting the gas. To top it all off, they do this while weaving in and out of traffic.

As members of these groups got older, and their ideals changed, some of the group moved toward cars. Most of them use square body cars like old Toyota Mark II’s. Their exhausts are still obnoxious both physically and audibly, their paint jobs are wild, the front lip coming off the bumper extends a couple feet out – they still want to make a statement.

This trend has moved up the social ladder to members of Japanese mafia groups. The only difference is they aren’t driving cars from the 80’s, and they kick up the flare a little. These people are all driving super cars like Lamborghini, Ferrari, and McLarens. These cars grab enough attention as is, but with the upgrades of reflective vinyl wraps, louder flame spitting exhausts, and flashing LED’s lining every body panel, you’d have to be blind to miss these cars rolling down the street.

Stance has evolved from its original roots but it’s still about standing out from the crowd. The lowered look is achieved by two methods, putting height adjustable suspension (coil overs), or running an adjustable air bag suspension. The difference is running coil overs you can only keep them at one height, whereas with air bags systems can be adjusted on the fly with a preset controller unit inside the car. 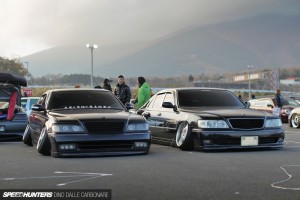 Wide wheels with a deep dish inset are often fitted with tires that are too small for the wheels is a prominent way of lowering your car even further once the suspension is maxed out. These tires are stretched onto the wheel reducing the height of the sidewall which gives a little bit extra drop to the vehicle.

When you choose wheels and tires the tires should be tucked in to the fenders and the wheel flush with the width of the fender. The other option is having your wheels tilted using camber adjustment (which forces the wheel hub away from suspension) making the bottom of the wheel poke out more than the top. To get the most, for lack of a better term, “street cred” the lip of the wheel should be as close to the fender as possible without rubbing. Having your wheels and tires done in the fashion is called ‘aggressive fitment’. 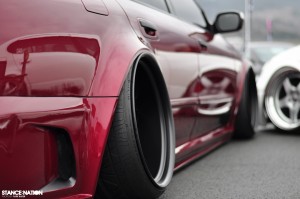 Aggressive fitment is promoted by Stance Nation, one of the biggest stance groups in North America. They have a form over function mentality. The goal the groups sets for their vehicles is to have the most aggressive fitment on their cars they can possibly have. Throw rational thinking out the window when it talking about this group. The end product on their cars would make it so you can barely get over the round cement threshold going into a parking lot. On their website in a blog post they stated “Please don’t get us wrong though, we have nothing but respect for Function, and if you can pull off Form & Function at the same time you will certainly have our respect.”

Dennis Gillingham is a car enthusiast and has stanced car. The way his 06’ STI is set up reflects the match between form and function. His tires tuck into the wheel wells only slightly, the face of the wheel is flush with the fender, and the tires are not tilted. While it’s still very low and has the form factor, you can drive this car daily without worrying about avoiding every street that has speed bumps. On the function side of things the motor is fully build, paired with an upgraded turbo, and a full three inch exhaust, the car is pushing out 330 HP on a very mild tune. 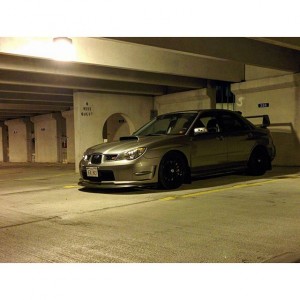 It’s far from the extreme Clark has gone to. Gillingham is much more meticulous about the appearance of his car. He has taken 11 hours on many occasions to just wash, wax, and polish it. Purchasing the best cleaning products costs a small fortune.

His vehicle is work in progress. He has a parts list the totals over ten thousand dollars. But the consistent changes makes his project something to talk about. You can always count on some new part or modification being done to the vehicle from month to month.

The way the car sits, and loud Subaru burble that comes from the exhaust make the car get a lot of attention. Reactions vary from people scratching their head wondering why anyone would ruin a perfectly good car, to people screaming out for Gillingham to ‘beat it off the rev limiter’ so they hear the exhaust even more. But most of the reaction comes from other car guys that know what he’s driving and what it’s capable of doing. The reaction from women, well that doesn’t really happen. As one girl said at a local meet “the wing on your car is pussy repellent.”

I have a fear of speed bumps, but I’m slowly getting over them

I have never driven a stanced car myself, but I’ve been in quite a few. The cars look great from the outside, but inside the ride is rough. Coil overs are stiff and don’t do anything good for your spine. If you’re on a good stretch of road with no pot holes, you’re golden; but just wait until you get to a bumpy patch or a construction zone. You can see the look on the drivers face change from pure elation to teeth grinding and wincing as they try to navigate the road like a mine field.

You have to be selective with every drive you take making sure there aren’t going to be any speed bumps on the road; or making sure you can get in and out of the parking lot without ripping your front bumper off.

Stance is not that much different from other methods of vehicle modification. Some people like to have their trucks jacked up three feet in the air with giant mud tires on it; some want their classic Mercedes to be show room quality, and others want every bit of horse power the can stuff under the hood for the track or drag. But for people into stance, most of them, just want to be “low and slow.” Almost everyone wants to stand out in one way or another. Stance is just another medium to push a message in a cookie-cutter world that form matters. The modification is the message.