The Atlantic Human Rights Centre traces its origins to a number of events, circumstances and individuals with which St. Thomas University is associated. Located in Fredericton, New Brunswick, the university is home to the Centre and has been influenced by domestic and international meetings which have been held in Atlantic Canada. 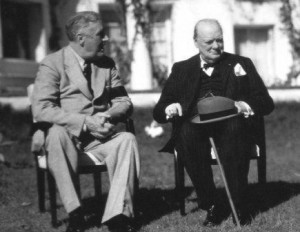 The Atlantic Charter resulting from the historic meeting held in Atlantic Canada during August of 1941 between President Franklin D. Roosevelt and Prime Minister Winston Churchill inspired the name chosen for the Atlantic Human Rights Centre.

The 1941 meeting in Atlantic Canada between the president of the United States and the Prime Minister of the United Kingdom is known as the Atlantic Conference. Although the Nazi tyranny and the atrocities of World War II brought these two great leaders together, the Atlantic Charter proved to be a lasting benefit of their encounter. Not only did the charter or joint declaration demonstrate that the guarantee of individual human rights was important to the Allies, but it also provided a sense of hope and promise to a world riddled by war and destruction.

The Universal Declaration of Human Rights

The first functional commission established by the United Nations was a commission on human rights chaired by Eleanor Roosevelt, the wife of the President of the United States. Atlantic Canada and New Brunswick were no strangers to the Roosevelts since they summered on Campobello Island in the Bay of Fundy.

Under the leadership of Mrs. Roosevelt and ably assisted by Dr. John Peters Humphrey, a native of Hampton, New Brunswick and an honorary degree recipient of St. Thomas University, the commission drafted an international bill of human rights which was proclaimed by the General Assembly on December 10, 1948 as the United Nations Universal Declaration of Human Rights.

The Universal Declaration of Human Rights has been accepted as “a common standard of achievements for all peoples and all nations, to the end that every individual and every organ of society, keeping this Declaration constantly in mind, shall strive by teaching and education to promote respect for these rights and freedoms…”.

On April 11, 1963 Pope John XXIII issued the Encyclical Pacem In Terris which drew inspiration from the United Nations Universal Declaration of Human Rights. St. Thomas University together with Catholic universities throughout the world gave special focus to a renewed interest in social questions relating to human rights in light of Pacem in Terris. A highlight of this interest was a conference organized in 1979 by St. Thomas University on the topic of Human Rights and Theology at which the President of the Vatican’s Pontifical Commission on Justice and Peace, Cardinal Roy, was a keynote speaker. The Cardinal underscored the lessons taught by Pacem in Terris to the effect that “human rights constitute the foundation of peace”.

20th Anniversary of the Universal Declaration 1968

The twentieth anniversary of the Universal Declaration of Human Rights was an important milestone for human rights developments both domestically and internationally. The Nobel Peace Prize in 1968 was awarded to Rene Cassin for his work in the field of human rights. Professor Cassin had represented France on the United Nations Human Rights Commission chaired by Eleanor Roosevelt and which drafted the Universal Declaration of Human Rights.

The work of human rights commissions functioned on a threefold basis: enforcement of anti-discrimination law, research, and human rights education. It is also noteworthy that many of the provincial human rights officials began to collaborate on an inter-provincial basis which in turn led to federal-provincial meetings of officials responsible for human rights legislation in Canada. One of the major results of this collaboration was the formal agreement reached among all of the provincial and federal governments to the effect that Canada should ratify in 1976 the International Convention on Civil and Political Rights, the Optional Protocol, and the International Convention on Economic, Social and Cultural Rights.

The federal-provincial-territorial collaboration in the area of human rights has continued in Canada and there have been periodic ministerial meetings. This co-operation is important for facilitating the ratification by Canada of new international instruments as well as meeting the report obligations under the given instruments. Professor Walter S. Tarnopolsky played a key advisory role during the discussions at the federal-provincial meetings considering the question of Canadian ratification of the covenants. Professor Tarnopolsky, who latter was to become a distinguished Justice in Canada holds an honorary degree from St. Thomas University.

The establishment of the Canadian Association of Statutory Human Rights Agencies in the late 1960s provided a forum in which the growing human rights commissions could share their resources and techniques. One of the early pioneers in this organization was Dr. Daniel G. Hill who was the first director of the Ontario Human Rights Commission and also an honourary doctoral alumnus of St. Thomas University.

The Case of Lovelace versus Canada

The students of St. Thomas University studying human rights during the 1978-79 academic year apprehended the inconsistency existing between Canada’s obligation under the International Covenant on Civil and Political Rights and the discrimination faced by Native women who marry non-Natives caused by the provisions of Section 12(1)(b) of the Indian Act. Under the guidance of Professor Donald Fleming a formal communication was prepared in the name of Sandra Lovelace, a Maliseet woman who had lost her “Indian Status” because she had married a non-Native. The communication was forwarded to the Human Rights Committee of the United Nations in Geneva pursuant to provisions of the Optional Protocol. In due course the Human Rights Committee found in favour of Lovelace and the Parliament of Canada enacted legislation repealing the discriminatory legislation.

The impact of the Lovelace Case was far reaching. One is able, for example, to find its influence on the wording in parts of the 1982 Canadian Charter of Rights and Freedoms.

The early 1980s saw an increased awareness and interest in questions of human rights and aging. St. Thomas University sponsored a Consultation on Aging in contemporary Canadian society entitled Let the Generations Join Hands. One of the objectives of the consultation, which was held at St. Thomas from October 14 – 16, 1982, was to study the proceedings of the 1982 World Congress of Aging held in Vienna. The over-arching theme of the discussion spoke to the desire and commitment to enhance the development of social justice and human rights for all in Canada without distinction because of chronological age.

The teaching of human rights in schools became more important for educators in Canada with the proclamation of the Canadian Charter of Rights and Freedoms. In Atlantic Canada the work of the provincial human rights commissions gave priority to human rights education. Professor Russel McNeilly who is a founding member of the Atlantic Human Rights Centre conducted a pioneering study on human rights education for the New Brunswick Human Rights Commission. Subsequently workshops were organized on campus at St. Thomas University designed for school teachers.