I’ve been asking my parents if I could have a tattoo since I was 15. My Catholic conservative family is 120 per cent against it, because the Bible says so and bla bla bla.

I had to wait until I was 18 to get my first tattoo, and of course, my parents had no idea. It was a Sunday afternoon, I walked by a tattoo studio and decided that was the time to have my first tattoo, I wanted that for so long and I couldn’t wait anymore. I did it. A little star in a place no one can see, unless I show it to them. Bellow my belly, just where my underwear can hide it.

That little star was more than just my first tattoo, stars make me remember how small I am, and when everything was falling apart, there was nothing I would do more than sit outside my balcony or go to somewhere darker just to look at the stars.

I thought to myself ‘I don’t need people to see it, I did it for myself and that’s enough.’ My dad still doesn’t know about it, three years later. When my mom saw it, I could swear she was going to kill me.

I didn’t stop after that one, I wrote my parents’ initials on my wrist, the word dream in my rib and a sentence, “wild hearts can’t be broken” on my ankle. Dream is my favorite word; I grew up listening to my dad telling me that dreams are the fuel to humans, that no one could live with no dreams. And the sentence? One of my best friends sent me once, and she said that sentence defined me. A few months before I decided to get that one, my dad told me that after him, I’m the strongest person in our family. I disagree with him, but the tattoo was a way of reminding myself that. Whenever I feel I’m not strong enough, I look at it and repeat that sentence to myself a million times.

The only tattoo that I can actually see without looking for it, is the one with my parent’s initials. It’s on my left wrist, and the reason why I chose left was because it’s in the same side as my heart. They’re the most important people in my life, and I know I will never live in the same place they’re living now. It’s a constantly reminder that I’m not alone in this world. It makes me remember who I am, where I came from. 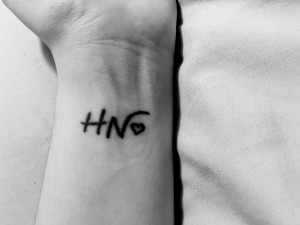 After some time, my mom figured out all of them; my dad only knows about two. I’ve never seen my dad so disappointed at me like the day he saw the tattoo on my ankle. The first time he saw it was two years ago, close to Christmas. He made me promise I’d never do another one, at least until I had a job.

My parents understand that God is not going to hate me for having a few drawings on my body. Actually, my parents never thought that.

One day I was on Facebook and my dad was sitting next to me. I found an article that a priest from Brazil wrote, saying that having a tattoo was as bad as killing someone and whoever had a tattoo would go to hell.

My mom has asked me more than once why tattoos are so important for me. I guess the ones I already have and the other five (or more) that I still want to get are part of who I am. All four tattoos have some meaning for me and the ones I want also will mean something. The only reason I haven’t got them yet is: there’s no place I can hide another tattoo.

The other day I was trying to explain to my dad why I wanted another tattoo. As much as he hates them, I think he finally understands that it doesn’t matter how many tattoos I might get, I’ll still be the same, with a little more color.

I managed to convince my dad to let me write something else. Every time I mention it to my parents, their first reaction is “Can you please not become a comic book with thousands of scribbles on you?” I think they know that’s not what I’m planning, but I think they’ll never get used to it.

I know my parents will never like the tattoos I have, even the one that is about them,. I know they’re going to hate every next tattoo I’ll ever get.

In the beginning, my mom thought the only reason why I did that was to be the “rebellious” girl. I just wish they knew that it has nothing to do with that. I just want them to know that it doesn’t matter how many tattoos I get, I would never do something to intentionally hurt them.

The next one? It’s the word “balance” in Portuguese. Equilibrio. When I told my mom I wanted to write that so I would never forget to keep my balance in everything in life. She was like “can’t you write it on a paper and carry everywhere you go?”

No mom, I can’t. It’s not the same. I swear, you might not understand and hate it with all of your guts, but believe me, those tattoos are more important than you think.