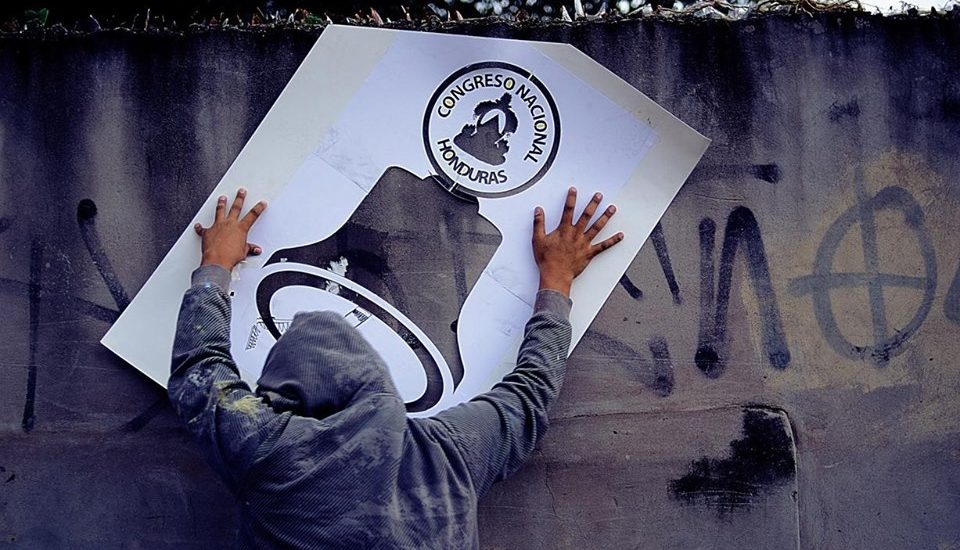 In Latin America, street art can be expressions of political defiance and urban vibrancy. And in the minds of many millennials, English graffiti artist Banksy rules. But as Honduran native Maria J. Burgos asks: why then can’t we find a wall in Fredericton where the conversations and concerns of this generation are illustrated? And would a province, now reining in its arms-length art board, ever patronize artwork that ridicules, subverts and surprises from street level?

His spray paint cans, stencils, and sketches are the only weapons of mass creation he’s ever needed to transform spaces. So when the clock hit 7 a.m., he was armed and ready. He parked two blocks away from the target. He walked from there with black shades and a black mask that covered half of his face—hiding his identity meant life or death for him.

He’d prepared for it since last week. The time of intervention varies per piece. It can be as short as half an hour. But this one, he knew would take hours to create.

While he was turning a blank wall into a politically charged explosion of color and figures, he saw a woman walk towards him. She was small, with ragged clothes and long hair. Her face was like a timeworn map—with hundreds of lines marking the many paths she’d taken. In her hands she carried a plate with tortilla and beans. She extended it to him without saying a word. She didn’t have to—her smile said enough.

He took it, thanked her, and continued with his piece.

An hour later, a Land Cruiser squealed past. Two men with guns leaned out of the car’s window, their screams deafened by the sounds of their gunshots.

They missed. Not everyone is fond of art that depicts Honduras’ president as a clown and his deputies as an army of monkeys.

Since 2011, Maeztro Urbano, his nom de guerre, has been a street artist in Tegucigalpa, Honduras. “During these years I’ve been detained by the police, persecuted by the government, threatened by pandilleros for territory and have shared my food with homeless kids in the streets. All of these have helped me realize who it is I paint for.”

From graffiti to murals, stencils and installations, street art has marked its place in contemporary art. This cultural movement and form of artistic expression began as nothing more than tags in New York City’s subways and alleys around the 1920s and can even be seen in ancient Roman ruins. Today, it has become a way to communicate thoughts and respond to socio-political and economic issues. The satiric and subversive work of English graffiti artist Banksy has become among the most recognized art among millennials.

The streets adapt to the changing environment, and so, the art created upon them becomes a commentary, a silent scream for change, that grows along with the times. There is always new material to bring to the streets—especially in countries where the government refuses to listen to the cries of its people.

Maeztro Urbano gained my admiration and respect since his art came alive in my city’s walls. What we were all thinking and condemning in our heads, he was publicly exposing. He was fearless and he was right. His art became my society’s voice and this is why he’s hated by many. It was then that I realize how important street art is within society.

But in Fredericton, and indeed much of North America, street art is seen more as a nuisance than a renaissance. It’s still fighting for space and, often, a voice.

Even though street art originated from graffiti, they are poles apart. Graffiti means tags. It means sharing your name with the world. Street art means raising difficult questions and communicating socially significant messages to society. It rejuvenates and beautifies parts of the city that are broken down. And most importantly, it gets dialogue going.

The problem is, not everyone understands this distinction.

During 1995 in New York City, Mayor Rudolph Giuliani implemented the Broken-window theory, which argues that disorder such as graffiti and vandalism come hand in hand with misconduct. By setting up an anti-graffiti campaign, the mayor was able to reduce crime.

Similarly, Federico Hoyos, member of the Colombian House of Representatives, intends to present a bill this year to regulate graffiti and Street Art in Colombia. According to Natalia Gutierrez, his political adviser, the bill has two objectives.

“The first objective is to regulate and provide specific areas for graffiti and street art, which will contribute to urban renewal. The second objective is to impose greater punishments such as fines and community service duties to individuals who make graffitis in public spaces such as schools, churches, monuments, etc.”

Angela Watson is Fredericton’s Cultural Development Officer. She says Fredericton has very little street art because within the city, there aren’t many canvases to host it. “But there’s a difference. We have a lot of random nuisance graffiti and it’s not even art. It’s just a tag. To me that is not street art.”

She believes street art which is done legally upon a space could brighten up a place. “We can have street art that can be very positive. But I am not talking about someone going without permission to paint someone’s wall.”

Fredericton is far from experiencing the type of crime, corruption and poverty that are every day realities in Tegucigalpa and Bogotá. Because of this, there might not be an incentive to create politically charged art in the streets. But street art, and public art culture in general, is lacking in Fredericton.

The province is even getting rid of its Art Board and employees are being moved inside the government. Akoulina Connell, executive director of the board, told CBC that the decision to transfer the art board’s employees inside the provincial government is “deeply problematic” for artists. New Brunswick seems to be moving in the opposite direction. And it’s leaving art behind.

What if there were places within the downtown where artists could paint on freely? Would politicians allow it, or would they rather choose what is to be drawn? Is there not a need for artists to express themselves in a public way?

A city’s street art makes up much of its culture. Having galleries and art within confinements is very different from living surrounded by art. Art that catches you off guard on your way to work. That makes you think. Art that makes you feel a sense of belonging and a pride towards your artists, your city. That doesn’t wait for you to admire it behind concrete walls and within frames, but instead leaks its way to you.

Taking it Too Far

According to Maeztro Urbano, within graffiti’s essence lies its need to be illegal. To be done without permission anywhere and everywhere. No one would consent to have their walls tagged with no purpose other than propaganda for the artist.

“But street art can be legal. Sometimes it has to be and this could be progress. You can’t paint a wall the way Kobra does it in a few hours without permission,” he said.

He believes if what’s to be done is share a positive message with society such as street artist Blu does, with immense dimensions, it is necessary to do it in controlled spaces. But when things are taken too far, street art suffers.

“The problem is when these measures are taken as a method of censure. When government tells you
where and what it is you will paint and then provides spaces for street art that are completely secluded from society. Being part of this means you are accepting to be censured. And this takes us back to the start,” he said.

Maeztro Urbano believes this will lead artists to do nothing more than tags once again simply with a sense of rebellion, no longer seeking for collective social change.

He said even though he has expositions, “I do most of my art outside because I’m assured that a broader spectrum of society will see the piece. If I make a stencil of violence inside a museum, the context does not fit. In the streets it does, perfectly.”

For this Honduran artist creating street art is always an act of love. “The every-day chaos and panic that we live with seems to disappear. Then and there, nothing else matters. It’s just me and that wall. To me it’s like an ephemeral love that lasts as long as the aerosol can spray.”