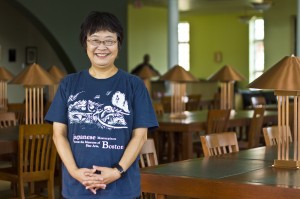 Yoshimoto Kayoko was practicing medicine in Japan and chose to study Gerontology at St. Thomas University.

Before Yoshimoto Kayoko came to St. Thomas University in 2008 she had been practicing medicine in Japan. But after 27 years in the same profession, she was looking for something new — she was looking to study gerontology, a subject that always interested her.

“I had been a geriatrician; I had witnessed death and disease and the suffering of people. As a Buddhist, one goal is to overcome the inevitability of aging and death.”

She says that both of those things led her to study gerontology. “I really wanted to study to find the truth about aging. That was my motivation for studying gerontology.”

The 57 year-old student recognizes that with her background and maturity she is not a typical student. One of the things that made her experience at STU so special was the gerontology program and her professors who recognized and accommodated that difference.

“The gerontology professors gave me the opportunity to think and study whatever I wanted in the field. They had the generosity to accept what I saw, thought and considered. They gave me the freedom to determine what I wanted to learn. This was very important.”

Yoshimoto says that gerontology is often overlooked as an area of study and that it is time to acknowledge its importance in society.

“I wanted to study aging from an academic point of view, I think that neglecting older people means neglecting yourself, your future self.  And you need to respect your parents and your grandparents.”

Coming to STU was the Right Decision

She came to Canada and STU because she was looking for a school that offered a gerontology program. St. Thomas ended up being the right fit for her.

“I found a lot of universities in Canada, but by comparing their fees and accessibility, St. Thomas had very affordable fees,” says Yoshimoto.

She adds that since New Brunswick was a coastal province she knew she would be able to find fresh fish. “For Japanese, without fresh fish we cannot survive.”

Yoshimoto says that she was surprised by the friendliness, not only the STU community but also Fredericton. On her first day, she decided to explore the city.

“I decided to walk around the city, and whenever I stopped to look at my map somebody always asked me ‘May I help you?’ I was stopped on the street five times and five people asked me. It’s amazing.”