New Wrinkles on the Face of Aging 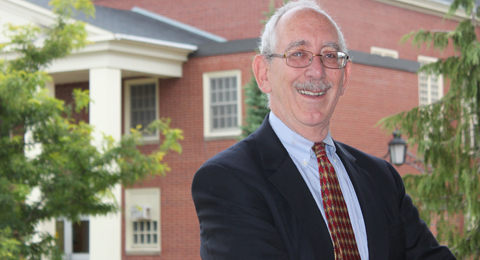 When St. Thomas University President Msgr. George Martin sought to launch a gerontology program in the mid-1980s, he saw that with people living longer, healthier and more productive lives, society would require a more thoughtful approach to aging.

Martin was not alone in his foresight. American centers, typically at much larger universities, dedicated themselves to education in this new field. They sustained momentum insofar as they were profit-making and had ties to existing programs. However, many of these gerontology institutes fell during the past quarter-century, while the STU initiative grew steadily.

St. Thomas University’s self-stated goal of being a place of “people, ideas and values” may explain its success. Three thrusts provided a framework for its approach to studying aging—appreciating age, fostering social justice in human relations and knowledge building. By creating a place where all could share their perspective and engage in critical discourse, the program put new wrinkles on the face of aging.

The university needed first to put in place rigorous educational initiatives. To lead that charge, Martin saw in Gary Irwin-Kenyon the intellectual breadth and determined savvy necessary to expand the liberal arts curriculum to include gerontology. They moved fast.

In the late 1980s, a new Bachelor of Applied Arts in Gerontology melded knowledge, skills and practice. A double major combining gerontology with other disciplines was soon introduced. This would prepare graduates for advanced study or aging-related careers in the public or private sectors.  Later, service providers and professionals already in the field were attracted to a new 36-credit certificate programme.

Within a few years, STU was the only Atlantic Canada university that offered a comprehensive degree in gerontology. Graduates of the bachelor of arts degree and certificate programs were securing employment in areas related to their studies.  In fact, since its founding, more than 330 degree or certificates have been awarded. Trained specialists in gerontology are in our work force tackling these new demographic challenges and opportunities with an informed perspective. That does not include the thousands of other graduates who were introduced to gerontology through their courses and electives.

Other ventures emerged from these core activities.

The Third Age Centre was established in 1990 to promote educational and service initiatives. A Visiting Chairs in Gerontology program brought international scholars to campus. Researchers from STU, UNB and the Dr. Everett Chalmers Hospital used the Fredericton 80+ Study to track the social, psychological, and health lives of the fastest growing segment of the population.

Irwin-Kenyon and his faculty colleagues—Debbie van den Hoonaard, Bill Randall, and Linda Caissie—have earned an international reputation for narrative gerontology. Through publications, courses and networks, STU offers a critical counterpoise to the scientism that stultifies so much research on aging. Each professor is recognized for teaching excellence, while their work in qualitative analysis and narrative studies impresses peers in research circles in Canada and abroad.

Irwin-Kenyon has done research on bio-medical ethics, educational gerontology and development psychology. Last week, he spoke nationally regarding new research on factors associated with longevity among adults aged 75 and older. van den Hoonaard holds a prestigious Canada Research Chair in Qualitative Research and Analysis and her well respected work on widows and widowers has enriched the social sciences. Randall, an ordained minister with a life-long interest in story-telling, is a professor whose work is anchored in interpreting stories in order to illuminate the ordinary and existential meanings and experiences of growing older. Caissie’s research is on gender and family relations in late life, leisure and aging, and qualitative research on images of age in the media and popular culture.

Why is this 25th anniversary celebration important to mark? It is because the work of this small program at this small university will affect our society and eventually each one of us. STU serves as a model for institutions of higher learning as they respond to challenges and opportunities associated with the Longevity Revolution.

Harnessing the benefits of this revolution requires bold imaginations and decisive action. The average human life span has increased by thirty years, which forces us to adapt some cherished values as we reconfigure patterns of daily living and institutional arrangements.

Our future well-being depends on how we respond to this profound, global demographic shift.

We might decide, as have some communities in North America and western Europe, to take ideas about aging seriously. We can capitalize on late life’s diverse gifts and talents for the benefit of men and women across generations.  Or we can discount, even diminish, age’s role in human relations, thereby blinding ourselves to wisdom that ripens with added years.

The choice is ours.

Dr. W. Andrew Achenbaum  is a professor of history and social work at the University of Houston where he holds the Gerson & Sabina Professorship of Global Aging.

Dr. Gary Irwin-Kenyon was recently invited to lecture in Taiwan. He spent almost two weeks in this beautiful country and gave workshops and lectures at two universities. The National Kaohsiung Normal University is located in the south of the country and the National Chengchi University is in Taipei in the north.

Dr. Irwin-Kenyon lectured on Narrative Gerontology and Narrative Care. He also visited a large Community Centre for Older Adults, and a Nursing Home. In addition, he toured parts of the country including a wonderful National Park and a seaside town named Hualin, as well as a Buddhist Monastery.

He was very pleased with the enthusiasm of the students and the lively discussions and questions raised. He also felt honored by the kindness and collegiality of his hosts, Dr. Yean and Dr. Tsang.

Dr. Irwin-Kenyon also participated in some Tai Chi classes. He returned home feeling honored to have had this invitation and having made some new friends. 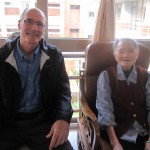 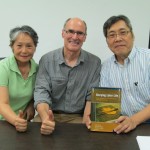 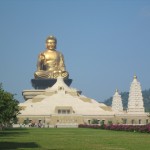 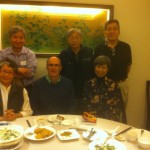 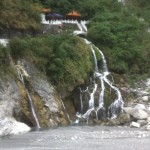 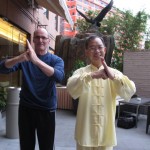 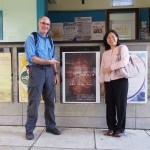 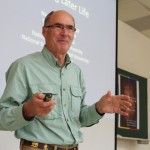 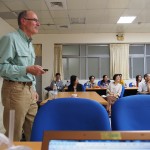 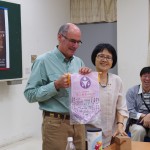 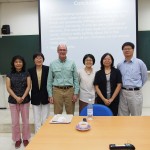 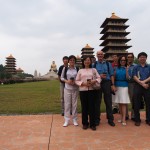